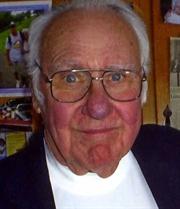 Donald J. D'Imperio Sidney, NY Donald J. D'Imperio, a longtime resident and businessman of Sidney, NY passed away on Sunday, February 22, 2009 at Binghamton General Hospital, Binghamton, NY. He was surrounded by his family at the time of his death. He was born in Unadilla, NY on April 9, 1927 to Sara and Louis D'Imperio. Don was a veteran of World War II. He married his high school sweetheart, Kate Cody in 1946. They owned and operated several area businesses over the last fifty years. These businesses included Don's Super Market, Don's Sub Shop and the Sidney Cab Company. He was a popular and highly respected musician and headed up a dance band for more than forty years. He once estimated that since 1949 until his retirement, his &quot;Don D'Imperio Band&quot; played at more than 500 local events, including dances, weddings and private parties. He was predeceased by his father and brother (Bob), both also well known area musicians. His passion was music, and his greatest enjoyment came from his 1963 Ford Galaxie 500 convertible. His love for his large family was total and complete. Don is survived by his loving wife of 62 years, Kate, as well as by his eight children: Fran (Richard) Martin of Kingston, NY; Chuck (Trish) D'Imperio of Oneonta, NY; Jim (Sandy) D'Imperio of Houston, TX; Susie (Gary) Whitham of East Syracuse, NY; Bob (Jan) D'Imperio of Lititz, PA; Chris Dexheimer, Teri (Tom) Schunk and Mary (Tracy) Simonds, all of Sidney, NY. He is also survived by fifteen grandchildren and three great-grandchildren. Don was a member of many area organizations including being a charter member of the Sidney Elks Lodge #2175. Friends are invited to call on Thursday February 26, 2009 from 1:00pm-4:00pm at the C.H. Landers Funeral Chapel 21 Main Street Sidney, NY 13838. Funeral services will follow at 4:00pm at the funeral chapel with Rev. Fr. Gordon Polenz of the Sacred Heart Church officiating. Burial will take place in the spring at Prospect Hill Cemetery, Sidney, NY. In lieu of flowers, the D'Imperio family requests that donations be made to the Sidney Emergeny Squad, 72 River Street, Sidney, NY 13838. Arrangements under the direction of C.H. Landers Funeral Chapel 21 Main Street Sidney.

Share Your Memory of
Donald
Upload Your Memory View All Memories
Be the first to upload a memory!
Share A Memory
Plant a Tree