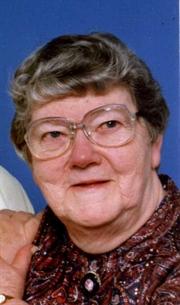 Minnie R. Pope Copes Corners, NY Minnie R. Pope, 85, of Copes Corners passed away on August 11, 2009 at Crouse Hospital in Syracuse, NY. She was born on June 11, 1924 in the town of New Lisbon, the youngest of 14 children of Frank M. and Minnie Belle (House) Richards. She graduated from Morris Central School in 1942. She was married to Elsor G. Pope in Gilbertsville on January 31, 1945. She spent her married life as a homemaker, always taking care of her family and everyone else she met. She loved cooking for and entertaining groups of family and friends, and she was famous for the peanut butter balls: she made over 1,000 each holiday season that she gave as gifts. Her door and her heart were always open to everyone, and she always gave unconditional love and acceptance to all her family. She is survived by her children Rick and Kathy Pope of Rockdale, and Sue and Neal Brown of Urbandale, Iowa; her grandchildren Andy and Kellie Pope of Rockdale, Jason and Hilary Pope of Garrattsville, Craig Pope of Rockdale, Merrisa Brown of San Antonio, TX, and Austin Brown of Urbandale, IA; her great grandchildren Michael and Chelsea Pope of Rockdale, and Autumn and Hannah Pope of Garrattsville. She is also survived by her sole sibling, Dora Osborne of Norwich, brother-in-law Albert and Linda Pope of Mt. Upton, sisters-in-law Eleanor and Lester Winfield of Mt. Upton, Alberta Ives of Sidney, Kathleen and Steve Brown of Bradley, IL, Beverly Sherwood of Spokane, WA, and Juna Richards of Oneonta, as well as several nieces and nephews. She was predeceased by her husband, Elsor, on August 28, 2007, her parents and several brothers and sisters. Friends may call from 10-11am on Saturday, August 15, 2009 at C.H. Landers Funeral Chapel 21 Main Street, Sidney, NY 13838. Funeral services will follow at 11:00am at the funeral chapel with Rev. Joseph Acanfora and Rev. Randy Palada officiating. Burial will follow at the Brookside Cemetery in Gilbertsville, NY. In lieu of flowers, donations may be made to the Gilbertsville Fire Department and Emergency Squad, or the American Legion in Gilbertsville. Expressions of sympathy may be sent to the family online at www.landersfh.com. Arrangements under the direction of C.H. Landers, Inc. Funeral Chapel 21 Main St., Sidney.

Share Your Memory of
Minnie
Upload Your Memory View All Memories
Be the first to upload a memory!
Share A Memory
Plant a Tree