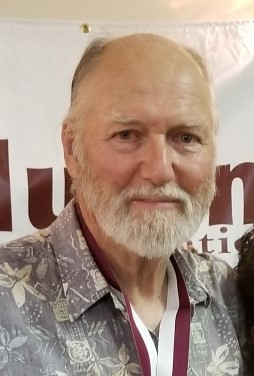 Please share a memory of Charles to include in a keepsake book for family and friends.
View Tribute Book
Charles Lemuel Bishop went to heaven on September 6, 2022 from complications due to Lewy-Body Syndrome, COPD and glaucoma. He was 79. Born in 1943 in a small Dutch farmhouse along the Susquehanna River, Charlie's first love was the outdoors. Nothing delighted him more than working in the fields with his family, searching for rocks and fossils near the riverbed, camping outside with his brother and playing with his dogs. His childhood was memorable for the lifelong friends he made at Sidney Central School and his participation as a center for Sidney High's undefeated 1960 football team. After high school, Charlie studied at several academic institutions, including Delhi College, Broome College and Binghamton University while working full-time. This challenging experience opened the door to many professional opportunities over the years, including positions at Amphenol, BF Goodrich Aerospace, American Bluestone and Huff Ice Cream, among others. In 1993 at the age of 50, Charlie made the bold decision to return to his roots and begin a produce orchard and garlic growing farm in the same fields where he was born and raised. It was a wise and fortunate enterprise, as Charles became widely known as one of the premier experts in garlic growing in the Northeast. Farmers, agricultural scientists, chefs and home cooks as far north as Canada often consulted him for his seasoned advice. He was known affectionately as "The Garlic Guy" throughout New York City, and especially Staten Island, New York, where he made many friends and met the love of his life, Beatrice. Charlie was a quiet man who shied away from fanfare. He never boasted about his many talents, although he was a gifted pianist, bass player and tenor. He was passionate about baking and engaged during his youth in astronomy and birdwatching. He never sought accolades for his service to the community, but he was a former 4H Club leader, Past President of the Sidney Kiwanis Club and gave tours of the farm to young students at Sidney Central School. Each year, he donated pumpkins to Sacred Heart R.C. Church for their annual Harvest Festival and supplied produce to many places of worship for church suppers. His reward came in the joy of doing things for others. Charlie revered his father, Charles Sr. and told many stories of how the elder Mr. Bishop instilled an impeccable work ethic in him. He adored his mother Anna, a woman who encouraged his love of music and animals, particularly birds and dogs. The two often spent time together in the kitchen, where Charlie first began to practice the art of baking. Charlie was enormously proud of his three children, Jack, Carol and Carin, but he did not want them to grow to be extensions of himself. We wanted them to become free and independent thinkers, and to carve their own paths in life. He spoke about how different they were from each other, each with unique personalities. He fondly remembered their childhood trips to the Adirondacks, Ocean City, NJ and Disneyworld. He never worried about them, knowing that with a solid foundation of self-confidence, their futures would be secured. He felt the same way about his granddaughters, Dylan and Raven. Charlie went from cradle to grave with his brother John. The two were known in the community during their youth for their haymaking parties and their adventures making homemade root beer and even homemade radios from old parts. The brothers worked together, fought together, stuck together and leaned on each other for nearly 80 years. Charlie said his brother was his rock. Charlie loved his wife of 19 years, Beatrice, unabashedly and with quiet devotion. He forgave her faults and applauded her virtues. The pair had secret codewords and each had a special name that only the other knew. They learned from each other, bringing vastly different backgrounds and histories to the marriage, and they benefited from that together. As one united couple, they discovered that none of the trials and travails of life could stand against the unbreakable bond of love. Their joys included walking along the Susquehanna River, playing with their dogs Buffy, Buddy, Jimmy the Bishop and Lulabelle, exploring antiques and delicious foods, and silently holding hands. Charlie is survived by his wife, Beatrice, his children, Jack, Carol and Carin, his brother, John, his son-in-law Benjamin, his grandchildren Dylan and Raven, his grandson-in-law Jordan, many cousins, nieces and nephews and hundreds of friends from all over. Friends are invited to call from 5:00-7:00pm on Friday, September 9th at C.H. Landers Funeral Chapel, 21 Main St. Sidney, NY 13838. A Mass of Christian Burial will be celebrated at 11:00am on Saturday, September 10th at St. Mary Catholic Church, 39 Walnut St. Oneonta, NY 13820. Share condolences and memories online at www.landersfh.com. Arrangements are under the direction of C.H. Landers Funeral Chapel, Sidney.
Friday
9
September

Share Your Memory of
Charles
Upload Your Memory View All Memories
Be the first to upload a memory!
Share A Memory
Plant a Tree