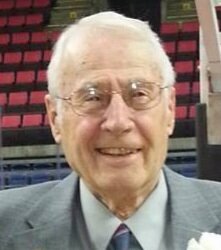 Obituary of Douglas A. Fessenden

Please share a memory of Douglas to include in a keepsake book for family and friends.
View Tribute Book
Douglas Allan Fessenden, 87, of Endicott, New York, formerly of Sidney, NY, passed away on June 28, 2022. Doug was born to Bruce and Margaret Fessenden on September 29, 1934, in Candor, New York. While attending high school in Candor, Doug displayed his love of athletics with his versatility and accomplishments as well as throughout his teaching career. After graduating from Candor High School in 1951 he went on to study physical education at Cortland State where he obtained bachelor’s and master’s degrees. While in college, he married Dorothy Grace Collyer of Berkshire, New York on September 4, 1954. At Cortland State he played two years of football and basketball and joined the gymnastics team. His first job as a P.E. teacher was in Gouverneur, NY, where their first child was born. The following year he moved his family to Sidney, NY where he and Dottie settled for the next 57 years, raising four children and establishing his long-term career as a teacher and coach. His teaching career in the Sidney School District began in Masonville and Sidney Center, then moved to the Junior High School in Sidney. From 1956 until he retired in 1989, he coached at least one varsity sport annually. Coach Fessenden began one of the longest coaching journeys in the history of the district, having coached junior varsity football, varsity boys track, varsity golf, varsity boys’ basketball, varsity baseball, and varsity girls’ basketball. At one point in the 60’s Doug coached BOTH the varsity and JV basketball teams; an undertaking not considered today. His best era of coaching came with the girls’ basketball teams in the 1980s, having won Western Division titles, Section IV titles, a Regional Championship, and entering the State Championship. Doug was named Coach of the Year twice by the Daily Star and once as the Press & Sun Bulletin’s All Metro Coach. Doug also refereed soccer for 22 years and enjoyed playing golf in Sidney and on many other courses throughout NY and other states. He enjoyed downhill skiing as well. During summers Doug taught Driver’s Education and painted houses. He continued painting after retirement. After retiring, he and Dottie enjoyed traveling across the United States. In addition to being physically involved in sports, Doug enjoyed watching sports and was a spectator at several Mets games at Shea Stadium. He loved watching pro football, basketball, and baseball on television. His favorite teams were the Jets, Nets, and Mets. His other passions were fishing, his favorite, and hunting both large and small game. Rabbit season involved the assistance of the family beagle. Every fall season he was in the woods on opening day. Doug’s big hunting excursions took place in Alaska, Idaho, and Newfoundland. He also loved playing poker–a weekly event that lasted at least 52 years. Doug was a long-standing member of the First Congregational Church of Sidney for over 60 years and also served as a deacon for many years. Doug’s biggest passions were his family and his cabin in Candor, his favorite place to be with his family and friends. He took pride in his cabin that he built, where he happily toiled for 37 years, creating lifelong memories and a family legacy. His dearest possessions were his wife and children and throughout his life he remained steadfast in his deep love and devotion to each one of them. Doug is survived by his wife of 67 years, Dottie Fessenden, and their four children: Susan Jones (and Patrick) of Broken Arrow, Oklahoma, Stephen Fessenden (and Suzanne) of Endwell, New York, Pamela Hall (and Kirk) of Canton, Georgia, and Jill Hathaway of Endicott, New York. He is also survived by his brother B. David Fessenden of Goodlettsville, Tennessee, seven grandchildren, Meghan Hathaway-Stewart, Brittney Jarvis, Andrew (Drew) Fessenden, Valene Marin, Tyler Hathaway, Kelly Diaz, and Rachel Hall; three step grandchildren, Mandy Ducreay, Emily Walton and Caleb Doane; three great-grandchildren, Jordan, Nolan and Cecelia Grace, five step great-grandchildren, Zariah, Draven, Allura, Esmen and Aaron and several nieces and nephews, great-nieces, great-nephews and cousins. He loved life, socializing, and always saw the good in everyone. His kindness, sense of humor, love of the outdoors, respect of others, and genuine, outgoing personality made him loved by all who knew him. In lieu of flowers kindly consider a donation in Doug’s name to Mercy House of the Southern Tier, 212 N McKinley Ave, Endicott, NY 13760, https://mercyhousesoutherntier.com/, where he received compassionate care in his final hours. All expressions of sympathy are welcome. Services will be provided by C.H. Landers Funeral Home, 21 Main St. Sidney, NY on Sat., July 2, with calling hours from 1:00-3:00pm and a funeral service immediately following at 3:00pm. Share condolences at www.landersfh.com.
Saturday
2
July

Share Your Memory of
Douglas
Upload Your Memory View All Memories
Be the first to upload a memory!
Share A Memory
Plant a Tree