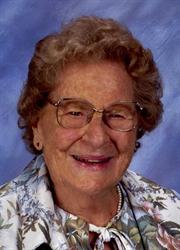 Obituary of Helen A. Kuebler

Helen Anna Kuebler Sidney, NY Helen Anna Kuebler, 98, a resident of Sidney, NY, for over seventy years, passed away Thursday, February 12, 2009 at the Sunrise Assisted Living Home in McLean, VA. She had previously lived at the Legacy Independent Living Facility in Rochester, NY for the past 16 months. Helen was born in Binghamton, NY, on June 29, 1910 to John and Anna (Adler) Winkler and raised in Johnson City, NY. She graduated from Johnson City High School in 1928, attended Plattsburgh, NY, Normal School where she received a teaching certificate in Business/Commercial subjects in 1931. She taught school in Fleischmans, NY, until 1934 and afterwards as a substitute teacher in Sidney HS and other area schools. On August 25, 1934, she married Carl Kuebler in Johnson City and moved to Sidney. They were married for 41 years until his death in 1976. In addition to her husband, she was predeceased by her parents, a sister, Marie Rylander and her husband, Harold, and an infant great grandson, Nicholas Mosca. She is survived by her son, Richard Kuebler and his wife, Kay, of Corinth, NY, her daughter, Ann Marie Hager and her husband, Paul, of McLean, VA. Grandchildren, Tim Kuebler of Queensbury, NY, Eric Kuebler (Tracy) of South Glens Falls, NY, Michelle Mosca (George) of Corinth, NY, Dr. Jonathan Hager (Sylvia) of Rochester, NY and Kimberly Newsome (Leon) of McLean, VA. She had eleven great grandchildren and two great-great grandchildren. Her brother-in-law, Alfred, and his wife, Elisabeth, and their children, several nieces and nephews mournin Germany and Switzerland. She is also survived by her nieces, Alice Sergeant and Constance Ellerbeck of California. She was a parishioner of Sacred Heart Catholic Church in Sidney. Helen was active in her Altar Guild, the Rosary Society and as a Eucharistic minister. In 1993, she was Parishioner of the Years. She was a member of the Sidney Golf and Country Club, the 20th Century Women's Bowling League, and the Three Rivers Bridge Association. The Sidney Hospital Guild recognized Helen in 2000 for 6000 volunteer hours. In 1999, Preceptor Beta Kappa Chapter of Beta Sigma Phi awardedHelen their First Lady Award for her 65 years of service to the community. She had traveled extensively to Alaska, Hawaii, Australia, NewZealand, Germany, Brazil, Bermuda, the Panama Canal, Argentina, Canada, and Norway. The family will receive friends at the C.H. Landers Funeral Home, 21 Main St., Sidney, NY, from 5-7 PM Sunday, February 22. A Mass of Christian Burial will be held at the Sacred Heart Catholic Church, 15 Liberty St., Sidney, NY, at 11 AM Monday, February 23. There will be a reception following in the Parish Hall. Interment will be in the family plot at Prospect Hill Cemetery, Sidney, at a later date. In lieu of flowers, the family is asking that donations be made in her memory to Angel Names Association, P.O. Box 423, Saratoga Springs, NY 12866. ANA is a non-profit organization ( www.angelnames.org) to aid families of stillborn children, begun after the death in 2000 of her great grandson, Nicholas Mosca. Arrangements under the direction of C.H. Landers Funeral Chapel 21 Main Street Sidney.