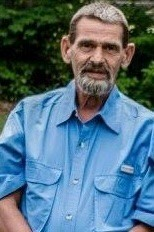 Please share a memory of Jesse to include in a keepsake book for family and friends.
View Tribute Book
With heavy hearts, the Riglioni family is sad to announce the passing of our beloved Jesse Lee Riglioni, Sr. Jesse was born and raised in Newburgh, NY. He then joined the Army and was honorably discharged in 1976. Jesse then met his wife, Nancy, and her son Alan, and they married August 15, 1981. In 1985, they decided to expand their family with another son, Jesse, Jr., and later in 1988 they had Billy. They later moved to the Sidney area. Jesse loved construction, painting, and almost anything that was related to being outside. He enjoyed cookouts and hanging out with family and friends, and just being his crazy self. He enjoyed and looked forward to our family vacations at Dorest Court Resort in Lake George. Jesse leaves behind his wife, Nancy Riglioni; sons: Alan Cote, Jesse and Crystal Riglioni, and Billy Riglioni; sisters, Mary Hileman and Rose Washington; grandkids: Alazé, Joey, Harley, Shy Riglioni, Destiny Anderson, Ashten and Aiden Savory; great-grandson, Mateo Marrero; and several nieces, nephews and cousins. He was predeceased by his mother, Dorothy Smith Riglioni; father, Edward Riglioni, Sr. and brothers, Edward Riglioni, JR. and Julius Riglioni, Sr. Friends are invited to call from 4:00-6:00pm on Thursday, February 17, 2022 at C.H. Landers Funeral Chapel, 21 Main St. Sidney. Share condolences and memories with the family online at www.landersfh.com. Arrangements are under the direction of C.H. Landers Funeral Chapel, Sidney.
Thursday
17
February

Share Your Memory of
Jesse
Upload Your Memory View All Memories
Be the first to upload a memory!
Share A Memory
Plant a Tree