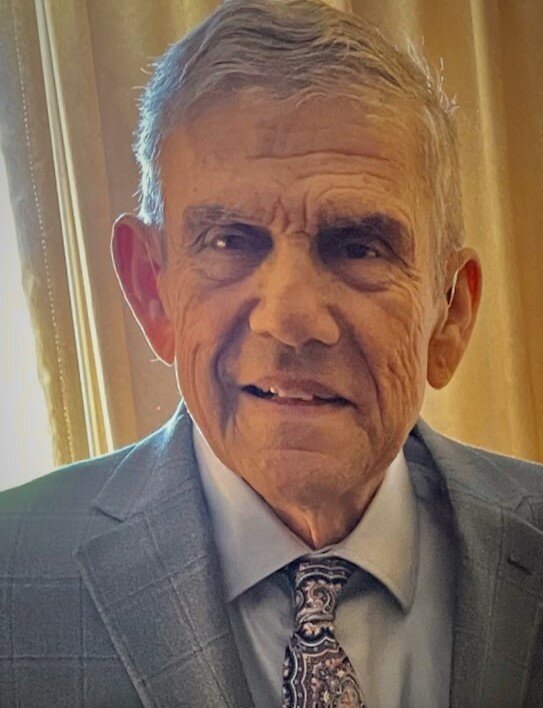 Please share a memory of James to include in a keepsake book for family and friends.
View Tribute Book
James “Jim” Suriano, beloved husband, father, grandfather and great-grandfather, longtime Sidney resident, and active community member, died peacefully at home December 23, 2021, with his wife and children by his side. He was 84 years old. Born August 3, 1937, to Francis and Carolyn Suriano in Troy, NY, Jim grew up among his Italian aunts, uncles and cousins. He loved telling stories about the friendships, camaraderie and characters of the old neighborhood. Jim attended St. Mary’s Elementary School and Troy High. After high school, Jim graduated from Hudson Valley Community College in 1959 with an Associate Degree in electrical technology and served in the Army Reserves. Jim married the love of his life, Margaret “Margie” Mackey on February 13,1960, in a beautiful winter ceremony. Soon after, they moved from the city of Troy to small town Sidney, where they built a life together for over sixty years. They were blessed to move into an apartment on Union Street where they met Phyllis and Anthony Donaloio, who introduced them to many of their lifelong friends. Together, Jim and Marge raised six children, creating memories and sharing traditions at holidays and on vacations that endured for decades. Jim worked for thirty years at Bendix, before serving as a recruiting specialist for The Hospital in Sidney, a position that gave him the opportunity to sing the praises of the town he loved so well as he encouraged doctors to build their practices in town. Jim’s commitment to his adopted hometown was apparent in the many ways he served the community. A devout Catholic, Jim was a member, and Grand Knight, of the Knights of Columbus, and member, and one-time president, of the Sacred Heart Parish Council. He served as Lay Eucharist Minister and lectored innumerable masses, including his favorites on Christmas morning and the Easter vigil. An active and dedicated Sidney Rotarian, Jim was a Paul Harris Fellow and served as Club President. He was a member of the Board of Directors of the Sidney Federal Credit Union for forty-three years, where he also served as Chairman. Jim’s love of nature was evident in the hours he dedicated to working on the Ed Roelle Nature Trail and helping plant trees throughout town. He was named Sidney Citizen of the Year in 1998. Jim was an avid runner who participated in the Utica Boilermaker for the first twenty-five years of its running. He ran numerous marathons, including New York City and Boston several times. He loved both the solitude and camaraderie of the sport, and encouraged many friends and family members to join him. One of Jim’s most treasured running memories was being part of the relay team that carried the Olympic Torch to Atlanta in 1996. Jim was predeceased by his parents Frank and Carolyn Suriano, and is survived by his wife Marge; his sister Micheleen (Suriano) Crupe, of Loudonville, NY; children Kathleen (James) Ray, Bainbridge, NY; Kristine (Scott) Hersey, Worcester, MA; Joseph (Catherine), Pensacola, FL; Kelledy (Ben) Farino, Scarborough, ME; and the twins, Jay (Asa), Fischers, IN; and Jimmy (Kimberly), New Hartford, NY, as well as fifteen grandchildren, two great-grandchildren, and nieces and nephews. Jim took great pride and joy in watching his grandchildren grow. Friends are invited to call from 4:00-6:00pm on Tuesday, December 28, 2021 at C.H. Landers Funeral Chapel, 21 Main St. Sidney, NY 13838. A Mass of Christian Burial will be celebrated at 11:00am on Wednesday, December 29th at Sacred Heart Church, 15 Liberty St. Sidney. In lieu of flowers, we ask that you donate to the Sidney Food Bank, or a food bank of your choice. Share condolences and memories with the family online at www.landersfh.com. Arrangements are under the direction of C.H. Landers Funeral Chapel, Sidney.
Tuesday
28
December