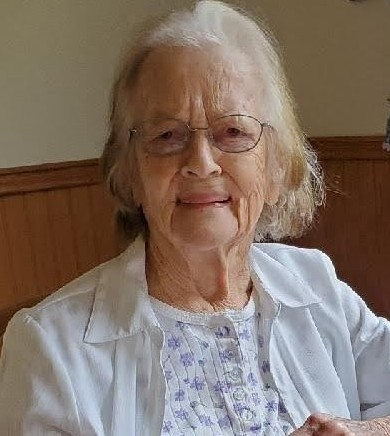 Please share a memory of Alice to include in a keepsake book for family and friends.
View Tribute Book
Alice Sines was taken home by the Lord on September 14th, 2021 after a brief illness just a few months shy of turning 100. She was born in Afton, NY on November 24th, 1921 the oldest child of the late Sanford and Iva Barnard. In addition to her parents, Alice was predeceased by her husband Herbert Sines; siblings Ruth Gunther, Marion Gladysz, Etta Mae Norman, Polly Fletcher, William Barnard, Robert Barnard and Horace Barnard; children Beverly Gowan, Donald Moffitt and Richard Moffitt; grandchildren Loretta Moffitt and Jesse Moffitt. She is survived by her sister, Mary Poltz Grandchildren, Valerie (Robert) Thompson, Mark (Maria) Dixson, Brenda (Eric) Summer, Linda (Dean) Goble, Kim Butterworth, Jim (Amanda) Moffitt, Chad (Nancy) Moffitt, Amy Moffitt, and Tammy (John) Garza; and numerous great and great-great grandchildren. Alice's first love was her family. She and Herb hosted many family picnics and holiday gatherings at their place on the hill outside of Bainbridge. A few years after her retirement from Bendix Corporation in Sidney, NY, she and Herb relocated to Greeneville, TN to escape the NY winters. In their later years she and Herb moved to Warrenton, VA to be closer to family. After Herb passed in 2015, she moved back to NY. Alice enjoyed playing rummy and parcheesi with her grandchildren as well as working on jigsaw puzzles. The family wishes to thank the 2nd floor staff at Elderwood in Waverly, NY for their compassionate care of Alice during her final weeks. Funeral services will be held on Friday September 17th at 1:00 PM at the C. H. Landers Funeral Home 21 Main St. Sidney, NY. Burial will follow at the Greenlawn Cemetery in Bainbridge, NY. Condolences and memories may be shared online at www.landersfh.com Arrangements are under the direction of C.H. Landers Funeral Chapel Sidney.

Share Your Memory of
Alice
Upload Your Memory View All Memories
Be the first to upload a memory!
Share A Memory
Plant a Tree