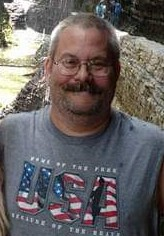 Please share a memory of Kenneth to include in a keepsake book for family and friends.
View Tribute Book
Kenneth E Lyons, 55 of Bainbridge, passed away unexpectedly on Sunday, August 22nd, 2021 at Wilson Medical Center in Binghamton NY. He is survived by His loving wife of 31 years, Nikki Lyons, along with his daughter, Ashley Lyons and her Fiancé Tim Price, his son, Cody Lyons, and Cody's girlfriend , Misty, His brother Mark Lyons (Louisville KY), His sister Missy Lyons (Louisville KY), his grandchildren Layla and Collin, along with nieces, nephews and cousins. He is predeceased by His mother, Mary Joyce Hanke, and His father Kenneth Lyons Sr. Kenny was born on October 4, 1965 and raised in Kentucky, where he began his career with the United States Navy after high school. Kenny served his country for 21 years; in which time he married the love of his life and raised their children. After serving his country, Kenny and his family moved to Bainbridge NY, when he began his career working for the Raymond Corporation in Greene, NY for 13 years. Aside from working, Kenny spent a lot of time playing horseshoes, cornhole tournaments and bowling with friends and family. Kenny is best known for being a devoted husband, a loving father, and an outgoing friend. His family meant the world to him. Services will be held on Saturday, August 28, 2021 at C.H. Landers Funeral Home located at 21 Main Street Sidney, NY 13838 from 4:00pm-7:00pm. The family invites family and friends to join them for a gathering at the American Legion at 22 Union Street in Sidney following the services.
Saturday
28
August

Share Your Memory of
Kenneth
Upload Your Memory View All Memories
Be the first to upload a memory!
Share A Memory
Plant a Tree