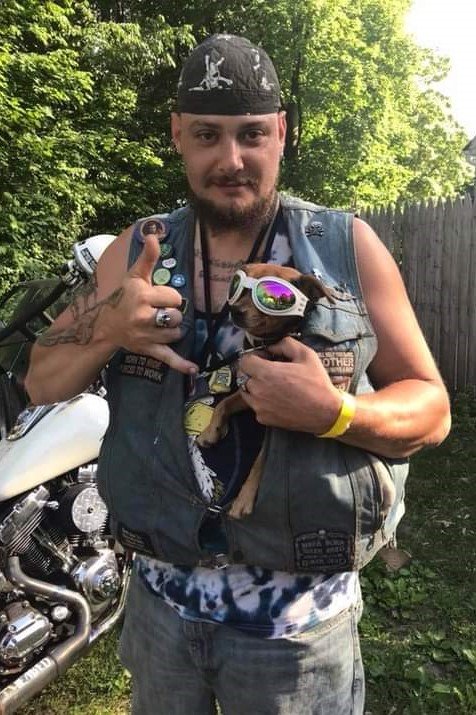 Bryan Earl Sherman 10/11/82- 04/30/21 Bryan was known by many names; namely, husband, father, son, and brother. But to everyone else who knew him, he was “Tank.” Tank was a loving husband to his wife of 20 years, Tonya Marie Sherman and devoted father to his three children: Mackenzy Marie age 17, Cole Andrew age 15 and Jethro Floyd age 11. Tank served his country in The United States Army and faithfully served during the Global War on Terrorism and Iraq Campaign, completing multiple overseas tours, honorably. He and his family settled in the Fort Benning, Georgia area after his medical retirement from service. Tank loved anything with an engine, and he could fix just about anything. You could always find Bryan with one of three things in his hands: a wrench, a fishing pole, or a gun. He was an avid fisherman and hunter. His main passion in life was motorcycles and every spare moment he had he was wrenching. Bryan was a gentle giant with a heart of gold. He was most famous for his bear hugs. In the fall of 2020, Bryan had a severe motorcycle accident. While making good progress recovering from this trauma, Bryan suffered a severe stroke on April 14th, 2021. He continued to have more strokes in the days following and he passed, surrounded by family on April 30th at the age of 38. Bryan leaves his legacy to be cherished by his loving wife Tonya, his children Mackenzy, Cole, and Jethro; his mother Cheryl Dubay; his father Phil Sherman and his wife Elaine; his brothers Kevin and Jesse and his wife Dawn, his sister Sierra Brown and her husband Chad; his step sister Ariel Peters and her husband Brian; his step brother Adam Green and many nephews, nieces and friends. A memorial service will be held on the farm where Bryan grew up in West Bainbridge, NY on Saturday May 29th at 1pm. Family, friends, and friends of the community are welcome to attend and celebrate the life of Bryan “Tank” Sherman.

Share Your Memory of
Bryan
Upload Your Memory View All Memories
Be the first to upload a memory!
Share A Memory
Plant a Tree