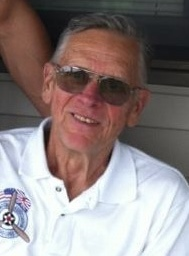 Howard D. Hoke Mt. Upton — Howard Duane Hoke, 88, passed away on Tuesday, November 3, 2020 at the New York State Veterans' Home in Oxford. Howard was born on April 18, 1932 in Sidney, NY. He proudly served his country in the U.S. Air Force, enlisting in April 1952 and was honorably discharged in March 1956. He was stationed at the Burtonwood Air Force Base in England for three of those years. On January 12, 1957, he was married to the love of his life, Ethel Day, in the Mt. Upton Baptist Church. She predeceased him on January 13, 2018 after 61 years of marriage. Howard was an extremely talented carpenter and woodworker for many years. He built so many beautiful pieces of furniture for his family that they will cherish forever. He was a perfectionist when it came to his work, always ensuring that "it was done right." He and Ethel loved to travel together. They enjoyed trips to places like Hawaii, England, Nashville, TN, and many others. Howard also had a love for animals. He and Ethel had many pets over the years who were all very loved and spoiled. He had a heart of gold and was always willing to help others. He was a kind and wonderful man whose family truly meant the world to him. Howard will be so incredibly missed by his children, Marianne and Alan Birdsall, Howard John and Sherry Hoke, Diane and Donnie Baker, and Ann and Paul Kelly; grandchildren, Stacy, Heather, Ashley, Sarah, Trevor, Tyler, Steven, Cathy, Tom, Lori-An, Tara, and Claire; great-grandchildren, Trenton, Anthony, Raegan, Maddyn, Mason, Hailey, Harper, Alicia, Chandra, Shelby, and Hannah; best friend and brother, Leo Hoke; and many nieces, nephews, and cousins. In addition to his beloved wife, he was predeceased by his father, Elmer Hoke; mother, Irene (Moore) Lowe; brother, Randall Lowe; and cherished daughter, Susan. Graveside services with military honors will be held on Tuesday, November 10, 2020 at 2:00pm at Maplewood Cemetery, Mt. Upton. (Please bring a mask.) A celebration of life will be held at a later date. In lieu of flowers, memorial donations in his memory may be directed to the New York State Veterans Home, 4207 St. Hwy 220, Oxford, NY 13830, or to your local SPCA. Share condolences and memories with the family online at www.landersfh.com. Arrangements are under the direction of C.H. Landers Funeral Chapel, Sidney.
Tuesday
10
November

Share Your Memory of
Howard
Upload Your Memory View All Memories
Be the first to upload a memory!
Share A Memory
Plant a Tree