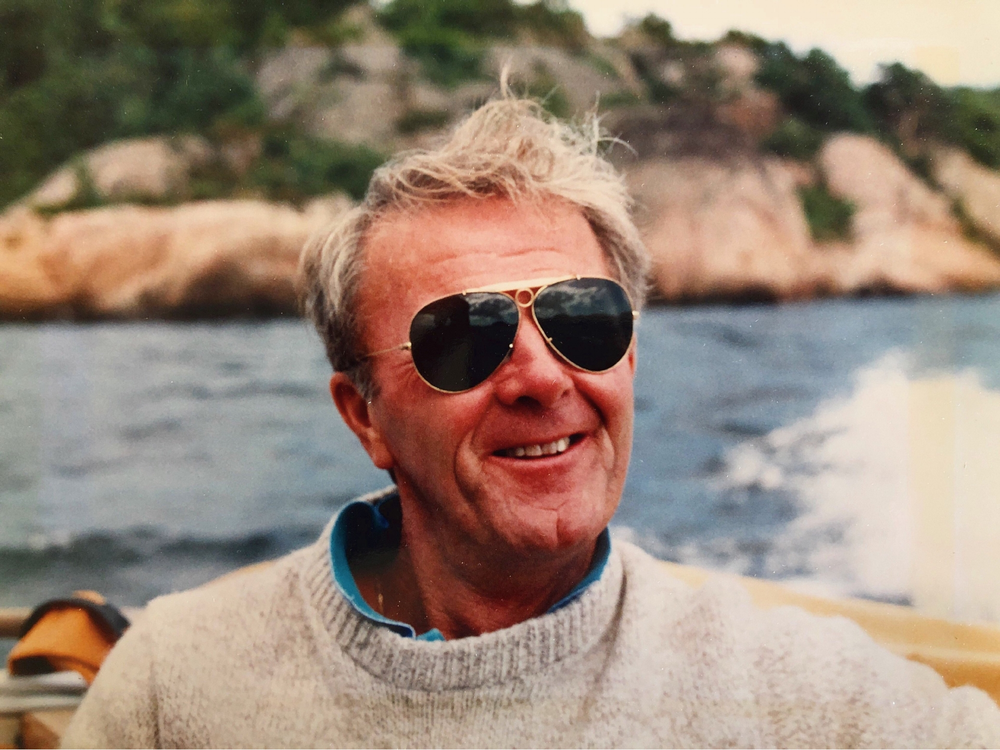 Curt's story is not a short or simple one. In his 85 years, he saw and accomplished more than many of us ever will. His hard work ethic, ambition, and Norwegian stubbornness led him to build a life and legacy that will live on in his family and friends for years to come. Curt was lucky enough to have not one, but two great loves in his life. His first marriage to Reidun spanned 31 years, until her passing in 1988. Together, they had three children: Chris, Arlene, and Carol. His second marriage to JoAnn lasted 29 years, and brought into his life a stepdaughter, Jennifer. Curt was born in Buhølen, Norway on September 15, 1934 to Gudrun and Thom Christensen. He spent his childhood between his family home in Melhus, Norway, and Weehawken, New Jersey. Curt was nothing if not adventurous. After graduating from high school, Curt joined the Norwegian Merchant Marines at age 16. He spent the next two years traveling the world, docking in far flung places like Brazil and Russia, and sailing around the Horn of Africa. His travels at such a young age gave him an education beyond what any school could teach. He encouraged everyone to venture out beyond their comfort zones, often reminding us that "the world isn't flat." As an adult, Curt went on to get his pilot's license. He loved taking people up in his plane and got a thrill out of making low passes. After sailing the world, Curt settled in Brooklyn, where he joined a community of young Norwegians in the Bay Ridge neighborhood. There, he met Reidun Aas at a Friday night dance. The two fell in love and married on May 11, 1957. When Curt was drafted into the U.S. Army, he and Reidun moved to Virginia, where Curt served on a small ship and became a member of the Honor Guard. After his discharge, Reidun and Curt settled in Upper Saddle River, New Jersey, where he built their family home. There, Curt started and grew his own framing business in New Jersey, Peak Construction. Chris would later join the business and work by his side, while Arlene managed the books. Growing up in Norway, Curt spent his childhood outside. He was an avid fisherman and hunter, and he particularly enjoyed salmon fishing and the challenge of hunting small game. His appreciation of nature stayed with him, and in 1969 he built a family cabin in Masonville, New York. The family spent every weekend there, but it was more than just a weekend place—it quickly became the heart of the family. Every November, the cabin transformed into hunting camp. But for the rest of the year, it was the gathering place for the Christensens and their many friends and was the backdrop for all manner of milestones, misadventures, and happy memories. In 1990, Curt had a heart attack and ended up in the hospital. Luckily for all of us, JoAnn was his nurse. The two were meant for each other and married in April 1991. In 1996, they built a house near the cabin, where they lived together until he passed. JoAnn shared Curt's love for travel, and together the two explored the United States and made several trips to Europe, where they cruised the Seine and the Rhine, traveled by bus across the United Kingdom, Ireland, Austria, and Switzerland, and made many trips back to Norway. In recent years, Curt and JoAnn spent winters in Naples, Florida, where they enjoyed taking daily walks on the beach. Throughout his life, Curt was a true family man. He always had time for his kids and grandkids, and he was a constant presence in all of their lives. He prided himself on giving every one of the Christensen grandkids their first bites of ice cream and taught all of his kids and grandkids how to drive (if you didn't spill his gin and tonic, it was a successful outing). He was always ready to greet you with a "Hey, kid," and was a reliable source for words of wisdom and advice. He had high expectations for all, but was always there when any one of the family needed him. His stubbornness was only exceeded by his generosity and encouragement. His influence expanded beyond his family, to the scores of others who he welcomed into his life. Curt's attitude towards life was always positive. He was known to raise a blonde Manhattan and say, "life is good." And he was right. Takk for helja, Pop. A wake will be held at C.H. Lander's Funeral Home in Sidney, N.Y. on Saturday, August 1st between the hours of 4:00pm and 7:00pm. A burial will follow in Upper Saddle River, N.J. on Monday, August 3rd. In lieu of flowers, the family asks that donations be made to Helios Care/Catskill Area Hospice at 291 River Strut Service Road, Oneonta, N.Y. 13820.
Saturday
1
August

Share Your Memory of
Curt
Upload Your Memory View All Memories
Be the first to upload a memory!
Share A Memory
Plant a Tree