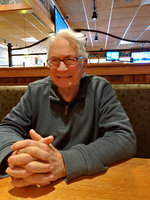 Jose Betancourt Cendan July 20, 1938 to October 8, 2021, 83 Jose was born in a sugar mill in Cardinas Cuba. He grew up in Cuba and entered a gaming career as black jack dealer at the Tropicana Hotel in Havana Cuba where he married the love of his life, Sonnia Nila Betancourt. He and his wife fled the communist takeover in Cuba in 1962 after the Bay of Pigs Invasion. He moved to Las Vegas, Nevada where he enjoyed a satisfying career in Casino/Hotel Gaming rising to Vice President of International Marketing for Caesar's Palace and other famous Casinos. He retired at 72 and lived in Mexico for 10 years. After the onset of dementia, he moved to Sidney NY to live with his youngest son. He passed away peacefully in his bed due to complications with Dementia and Corona. He is preceded in Death by his parents, Herminio (63) and Ondina Betancourt (92). He will live on in the broken hearts of his two sons, Damian (59) and Yamir Betancourt (58) and his three grandchildren, Rory, Olivia and Aaron Betancourt. Jose lived an honorable and decent life and was kind, caring, compassionate and generous to everyone around him. He educated his children and looked after his aging parents as a dutiful son till their passing. He was a loving father to which there can be no equal. He will be missed and loved by all those who knew him. Condolences and memories may be shared online at www.landersfh.com Arrangements are under the direction of CH Landers Funeral Chapel Sidney.