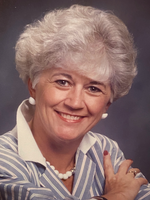 Janet Marion Wright (Glasner), 81, passed away peacefully in her sleep on February 12, 2021. She was born in Hackensack, NJ on August 10, 1939, to Kenneth and Marion Glasner. Her family moved to Chenango County when she was 6. She graduated from Sidney High School in 1957, married David E. Wright of Unadilla in 1960, and served as a military wife for many years. She returned to Sidney in 1993 to care for her mother. She worked for DeMulder Realty and the Sidney Chamber of Commerce. She was also actively involved in the local United Way, community theater, the Garden Club, and is a member of the Beta Sigma Phi International Senior Sorority. Charity work and community involvement were very important to Janet - many in Sidney knew her as Mrs. Claus. Janet is survived by her four children: Sharon L. Wright, of Sidney, Douglas E. Wright (Michelle) of Nashua NH, Stephen D. Wright (Julie) of Columbia MD, and Daniel S. Wright (Julie) of Lithia FL., her sister Carole Baker (Bud), her sister in law Linda Glasner, her grandchildren: Benjamin, Christopher, Jocelyn, Halle, Catherine, Rachel, Luke, and Zoe, her aunts Jeanne Batchelar, Jane Glasner, and many nieces, nephews, and cousins, and her ex-husband David. She was predeceased by her parents and her brother Donald Glasner. In lieu of flowers, contributions in Janet's memory may be made to the United Way of Sidney Inc. PO Box 14, Sidney, NY 13838 or online at http://sidneyunitedway.org/. Calling hours will be held on Wednesday February 17, 2021 at C.H. Landers Funeral Chapel 21 Main St. in Sidney, from 1:00 pm - 3:00 pm. Condolences and memories may be shared at www.landersfh.com. Arrangements are under the direction of C.H. Landers Funeral Chapel, Sidney.